Vermont has an endless bounty of hikes, from the challenging Appalachian/Long Trail that traverses the entire state, to short hikes with big rewards. All of them are steep, because these are the Green Mountains, after all!

Here a couple we enjoy that can be done with the kids, or with people in your party who aren’t used to long hikes. Both will reward you with outstanding views for not too much effort. Don’t forget to pack your binoculars or a camera!

Hike to the Top of Okemo

There’s a short hike to the top of the Okemo Mountain Road that gives you an awesome vantage point with less than a mile of hiking. You can hike through dense, magical woods up a steep, rocky trail, or you can hike up a relatively easy road. At the top you have a mountain-top view from the Okemo Peak that lets you gaze down upon the Village of Ludlow, Lake Rescue, and mountains all the way to New Hampshire. You’ll see the ski lift and can climb to the top of the Fire Tower (if you’re not afraid of heights). It’s less than a mile round trip. There are some pull-offs with scenic views on the way down. Learn more.

Directions to the Trailhead:

Turn left on Route 100, then left at the end. Make a right onto Okemo Mtn Rd. Drive up to the Okemo Lodge, continuing up the private road to its left (OPEN from late spring to late fall). This road will switchback straight up the mountain for about 4-5 miles until you reach the top. You’ll be able to park at the end and either walk on the road or go up the trail to the left.

Children as young as five can successfully navigate the hike up the Echo Lake Vista Trail. It’s steep but not brutal, and the views of Echo Lake, okemo Mountain, and the whole area from the top are breathtaking. there’s a nice rock there where you can relax and enjoy a snack. It’s only 1.5 miles round-trip. Learn more.

The trail is located at Camp Plymouth State Park Distance. Go north on Route 100 (turn right from Benson Point), North, then turn right onto Kingdom Road at the Echo Lake Inn, follow 1 mile to Boy Scout Camp Road, and turn left to Camp Plymouth State Park. Park for free in a parking lot on the right before the road crosses the creek. The trailhead is past the cabins on the right, or you can go farther on the road and access the trail by old wooden steps that take you through an ancient cemetery.

Beto and I recently had the lucky opportunity to take a lovely, relaxing fall foliage ride on the Green Mountain Flyer, a scenic ride on a vintage train from Chester to Rockingham in southern Vermont. The train whistle blasted our eardrums to oblivion as the ancient train noisily announced its arrival at Chester Depot. The bright red engine was pulling about five dark green cars, each labeled Green Mountain Railroad.

The fall foliage expedition on the Green Mountain Railroad was a free event sponsored by the OkemoValley Regional Chamber of Commerce, based in Ludlow, of which I am a
new member. We checked in with Diane, the organizer, and got into line while waiting for the refreshments to be loaded on the train. Finally, a young woman from the Chamber climbed up on the stairs and called out, “All Aboard!” and we boarded the train. 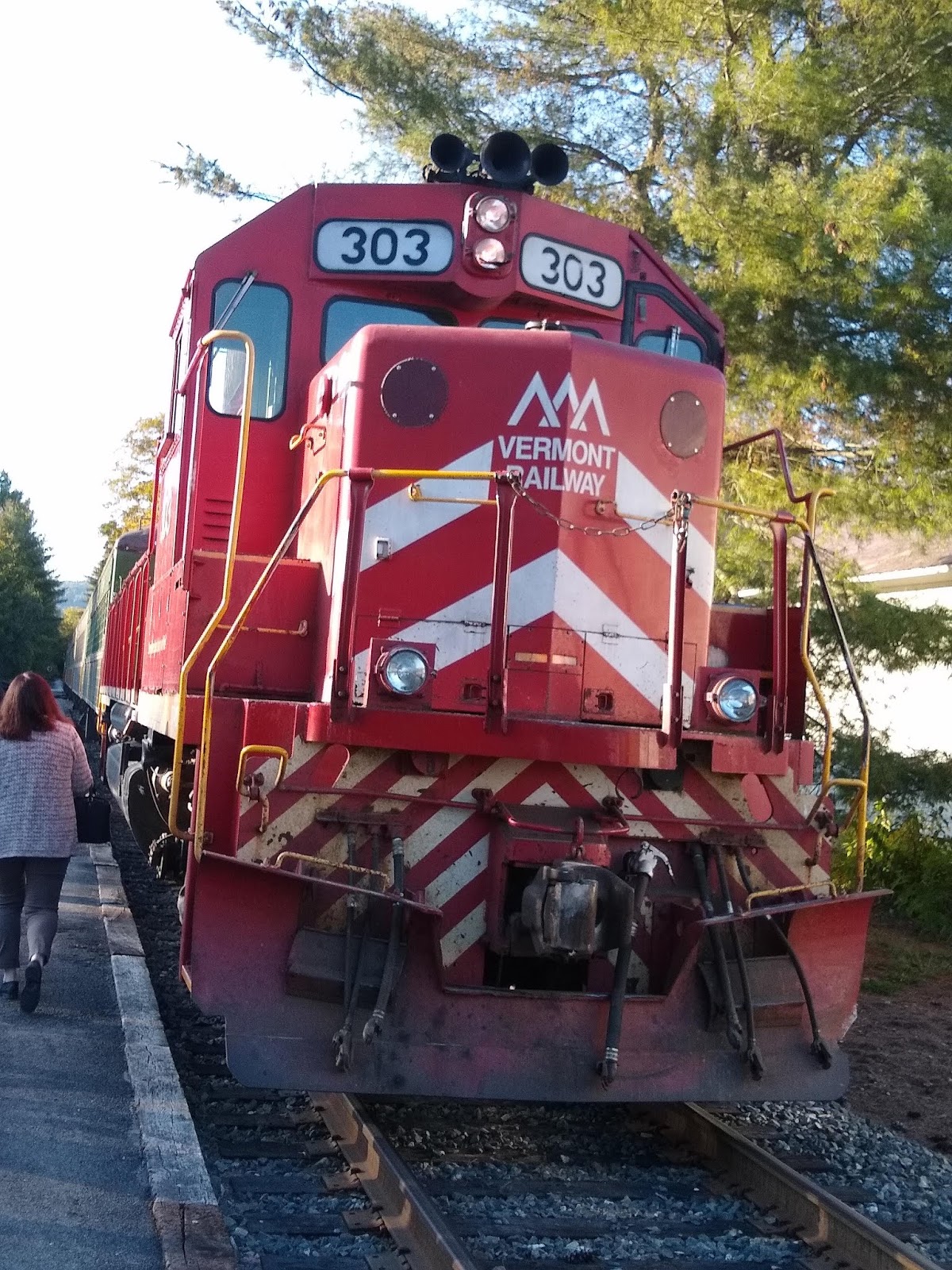 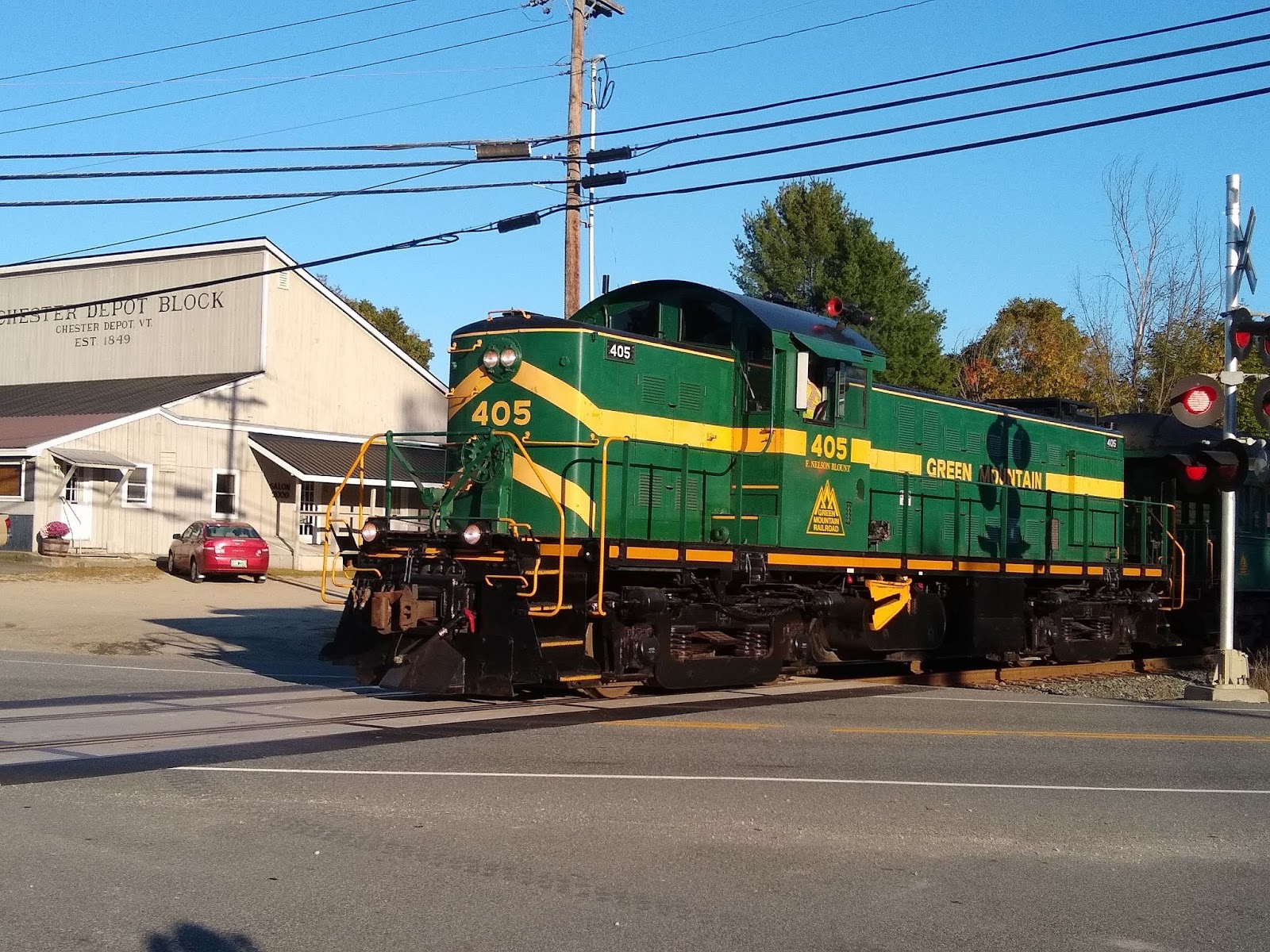 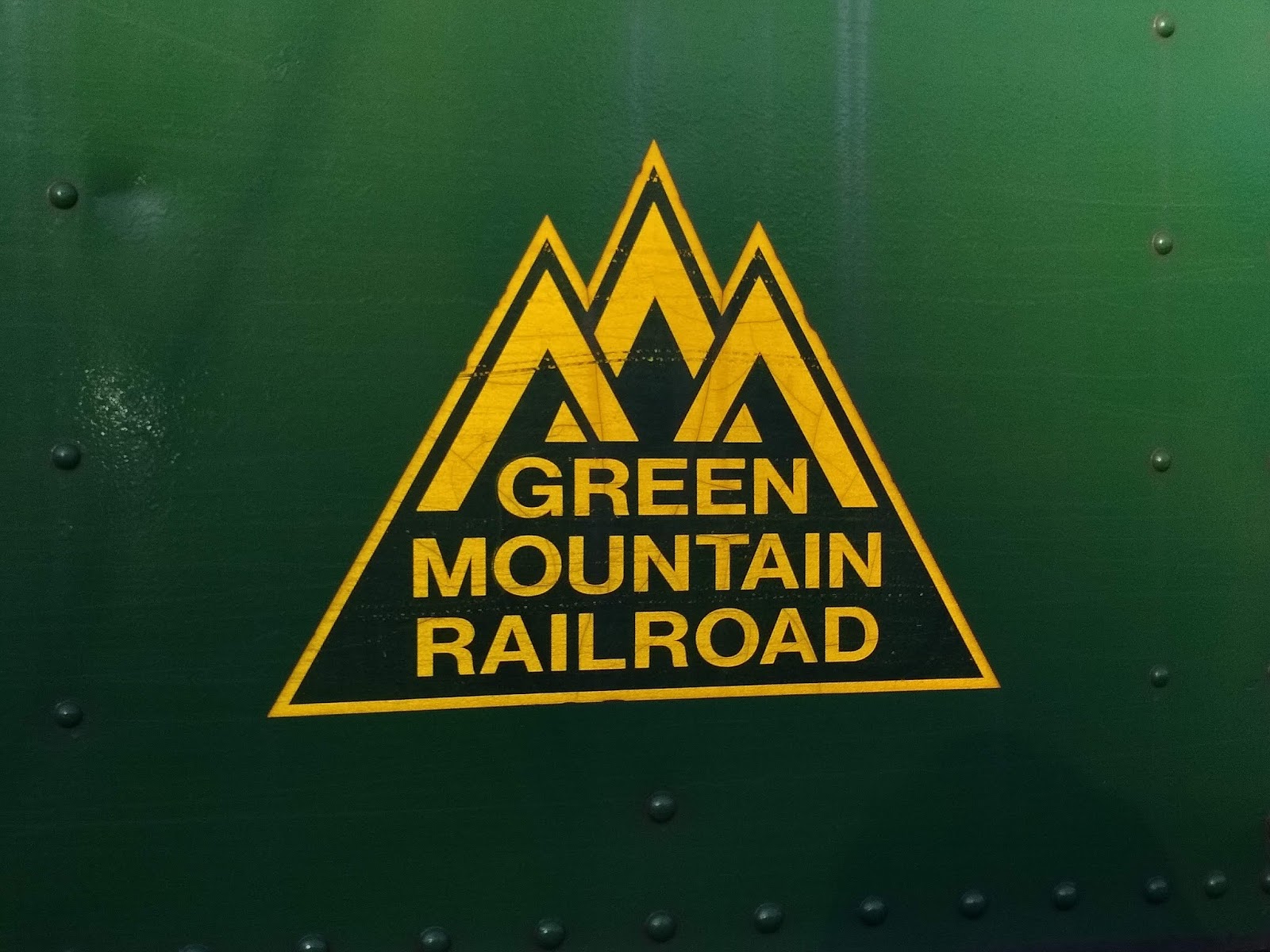 Bob and I grabbed a forward-facing seat in the first car, in an open booth with an enormous wood table and another double seat across from us. The windows were huge and the view was great, but after 20 minutes or so I got a hankering for some refreshment and set out to explore the train.

I wobbled back on the jerkily moving train, holding on to seats for dear life to keep my feet under me, through three cars that featured plush leatherette high-backed bench seats facing each other. Just when I thought I was at the end, I found a car with a table covered with white paper bags, and a narrow hallway ahead on the right. I inched through, and discovered a sweet little bar car with about 20 seats (some occupied by Chamber staff) and a musician, Bill Brink, singing and playing guitar and kazoo. I hustled back get Beto, ordered us up a couple of surprisingly good glasses of Chardonnay, and we settled in to enjoy the rest of the ride in the Bar Car. 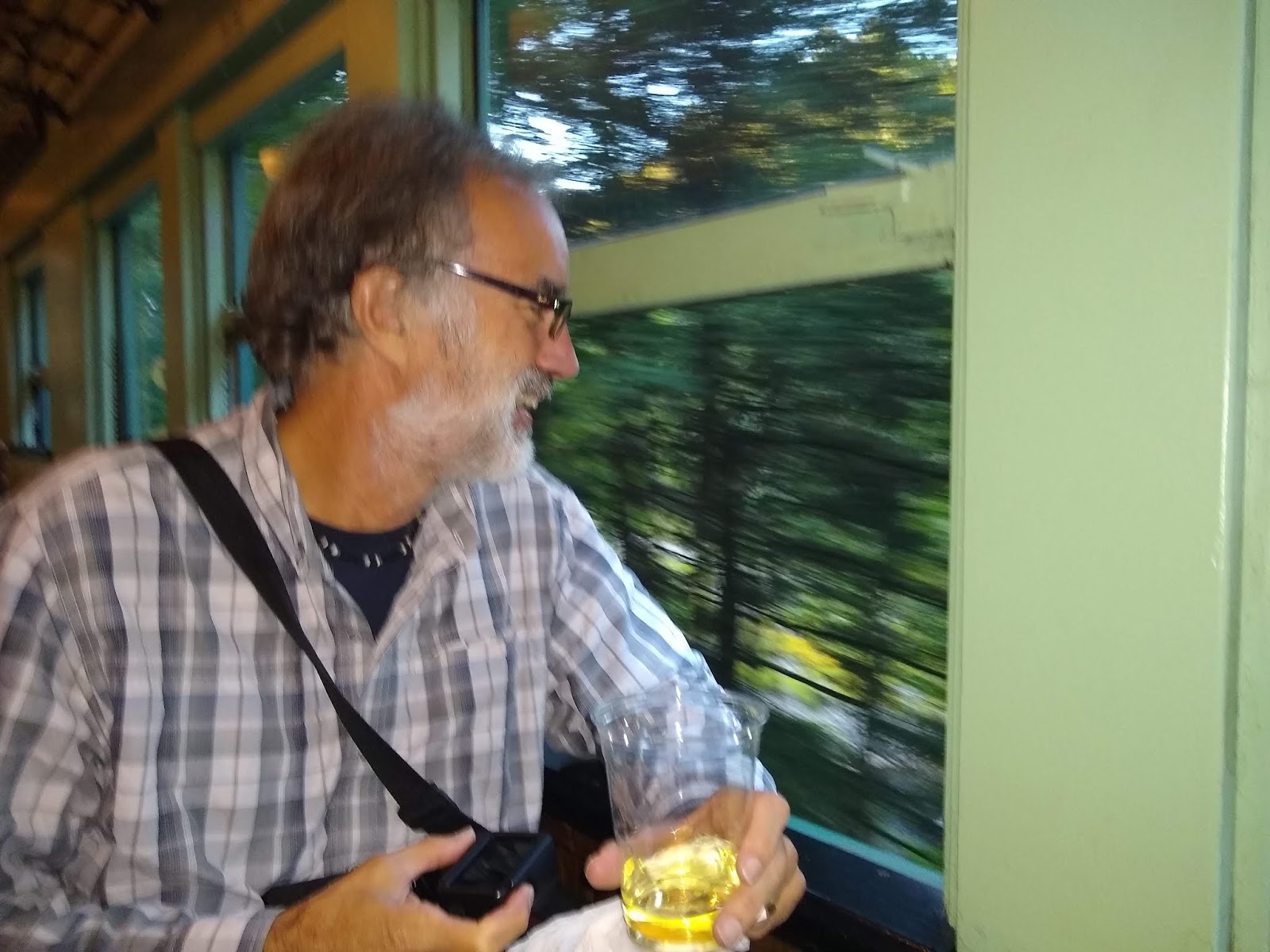 Directly in front of us was the bright red engine chugging away. The engineer would occasionally walk jauntily along the jerking engine and enter our car from the front. ()
We relaxed with our wine, bag dinners provided by the Chamber (courtesy of Mr.
Darcy’s Restaurant) and enjoyed the ride.

We rode alongside a scenic, winding river, passing a stunning river gorge that was almost past before we could get the cameras out, and crossing a heavy red iron bridge.
Vermont is famous for its spectacular autumn foliage, but we are still about three weeks before peak colors, so the ride featured mostly green foliage, with occasional bursts of bright yellow, fiery orange or deep red in sections of trees that acted as a precursor of things to come. The shrubs along riverbeds seem to have gotten the memo early, though, and preened with deep burgundy and crusty golden leaves.
We passed a couple of covered bridges, a signature sight in Vermont that never loses its appeal. One’s identifying sign read, “Built in 2012,” a melancholy reminder of the devastating floods caused by Hurricane Irene that September that washed away or severely damaged many of these classic structures throughout the Green Mountain State. 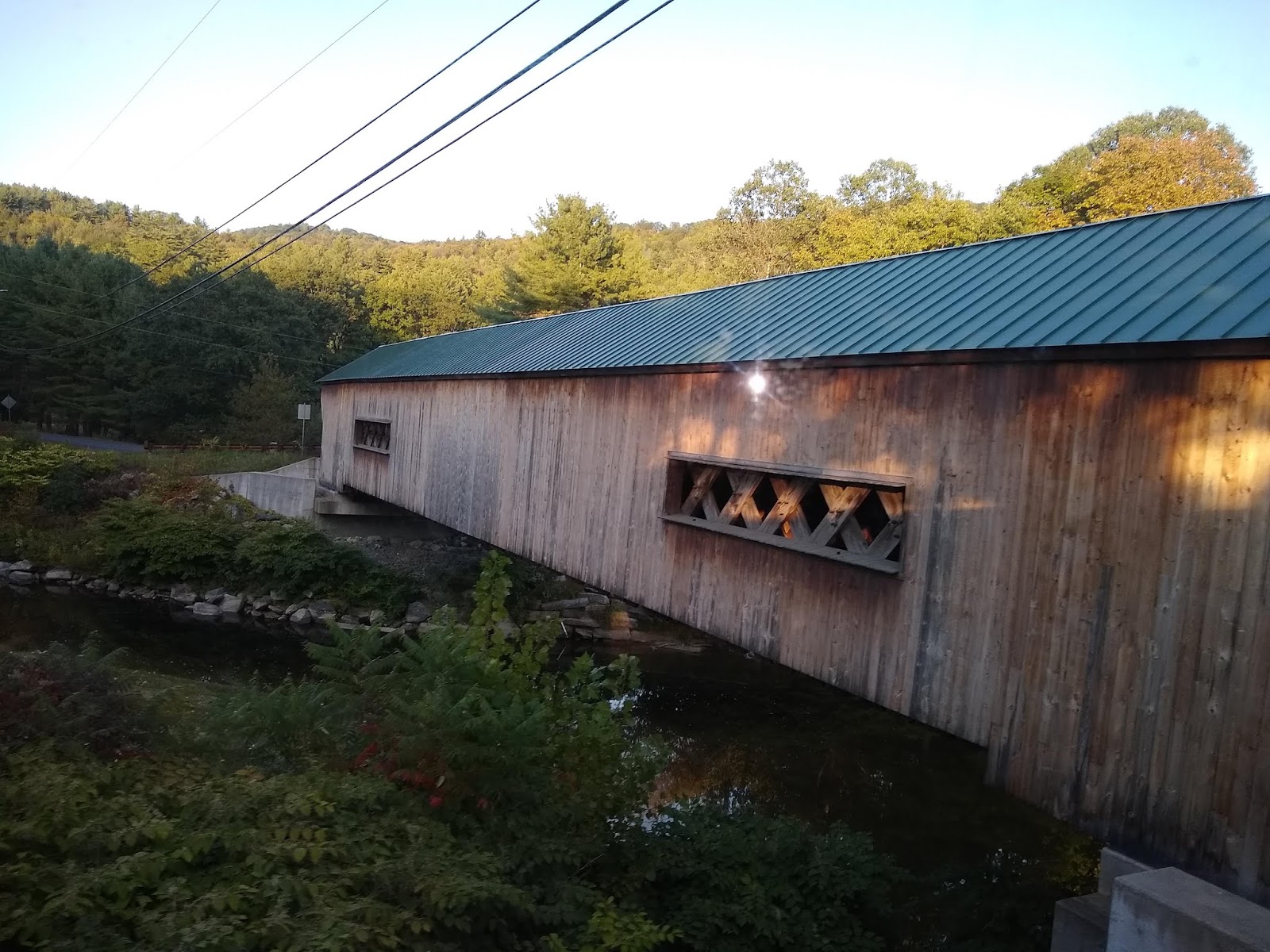 We saw (and smelled) cows grazing in fields, and admired field after field of corn stalks.  Lisa, a fellow CHamber member with a cow farm, told us those fields would be turned into mash for its farms to eat, but hers are grass-fed. (Beto plans to visit her farm this fall to serenade her cows on saxophone.)

Take a Ride Yourself!

If you‘re interested in taking a ride on the Green Mountain Flyer, you can learn more here. To learn more about the Okemo Valley, which offers so much more than its world-class ski mountain Okemo Mountain Resort, visit the Chamber’s website, yourplaceinvermont.com. 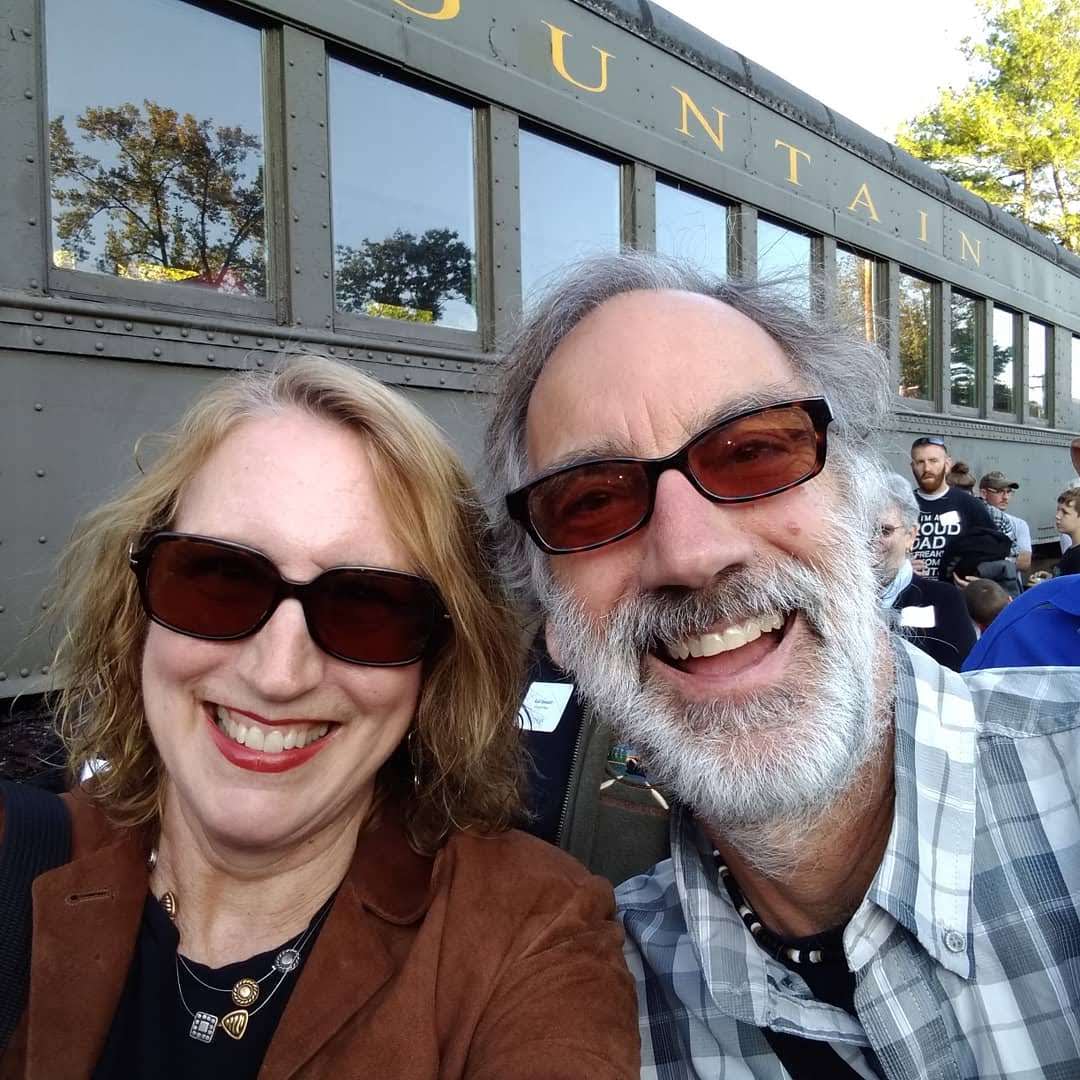 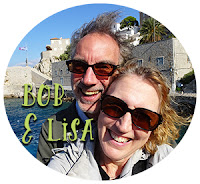 Over 15 years ago, when we were living in New York, we bought a house in Vermont that we began making plans to retire to.
We called the six-bedroom chalet The Lake House because it has a private dock on 200-acre Lake Rescue. Lisa and the kids spent half the summers there, while the kids attended Farm & Wilderness Day Camps, and I came up by train from Manhattan every weekend and took two weeks vacation in late August.  Often extended family members and friends would join us.
When the house wasn’t rented out (which is how we paid for it), we spent winter weekends there, as the kids learned to ski at nearby Okemo. We went up in spring and fall to do projects, such as building a new back deck and tiling the kitchen. We read in the hammock, watched shooting stars from the hot tub, pulled the kids around in inner tubes from the back of a Zodiac inflatable boat. Lisa taught a number of children how to fish off the dock, and got up early many mornings to kayaked in the mist.
Even when we moved to Colorado and couldn’t get there anymore, we didn’t sell the place because of all of the fond memories. We just rented it out year-round, going up every couple of years just to check on it and make repairs. But as our retirement thinking evolved, we wondered whether we even wanted to go there after we stopped working. It was so cold compared to Colorado.
However, as part of our circuitous route to Mexico, we visited family and spent Christmas on the East Coast. That included five weeks, including Thanksgiving, in our house in Vermont. Ski resorts in Vermont typically try to get some runs open by Thanksgiving, usually with man-made snow, but we were “treated” to several unexpected snowfalls and temperatures that only on a few days exceeded freezing. Ludlow had gotten three feet of snow by the time we left.
Yet, even though it was cold and icy, we rediscovered what we loved about Vermont. We got up each morning, shoveled a new path to the hot tub on the back deck, and enjoyed an hour of warm, splashy solitude with mimosas while gazing up at snow-covered pine trees.
In addition to hours and hours spent maintaining the house, hiring staff, and replacing a TV and a mattress, we played Pinochle or UNO at night. We cuddled up watching movies. Lisa had a rom-com marathon with Grandma. We worked on a 1,000-piece puzzle. We discovered new restaurants and revisited old favorites. We walked through the shops in downtown Ludlow, and did Christmas shopping in charming Woodstock. We enjoyed ice cream multiple times at Sewards, our favorite ice cream shop in Rutland. Lisa reconnected with friends from her summertime church. We had family members visit with babies that drooled all over Duplo and threw scraps of food to the cats.
It was divine.
To add to our rediscovery, Lexie plans to attend Champlain College in Burlington, Vermont, beginning in August, and we want to help her get settled in. So instead of flying Lexie to college, we plan to drive back up from Mexico to Vermont in July and spend a few months at our house. We can enjoy Vermont in the summertime, our favorite season. Lexie may be able to get a summer job at the little store up the road, or the Italian restaurant down the road.  After we get Lexie settled into college in late August and return for Parents’ Weekend in late September, we may as well stay and enjoy the foliage season! Then we will head back to Mexico.
That may be the plan for every year Lexie is in college — back to Vermont for the summer so she has a home to go to and make a little money, then return to Mexico for the remaining nine months of the year.
We think this is a great way for us to get our fix of Vermont during a beautiful time of the year and still explore the world!