We just spent a whirlwind two days in Montreal, a visit that was barely long enough to get a taste of this fascinating, bilingual city and want to come back for more. We loved it!

Montreal is just a two-hour drive from Burlington VT, where we dropped our youngest, Lex, off for a college orientation weekend and then headed north. We met a surly Canadian at the border crossing, who ordered Bob to turn off the video camera and unsmilingly peppered us with questions.
And then we were off, driving north through cornfields and flat farmland that presented a striking contrast to the lush green mountains we had just passed through in Vermont. After an hour or so, Montreal swallowed us up rather suddenly as we entered the city, which is actually an island. We crossed a long bridge that seems to still be under construction. (In fact, much of Montreal seems to be under construction – the city is clearly experiencing a building boom.) 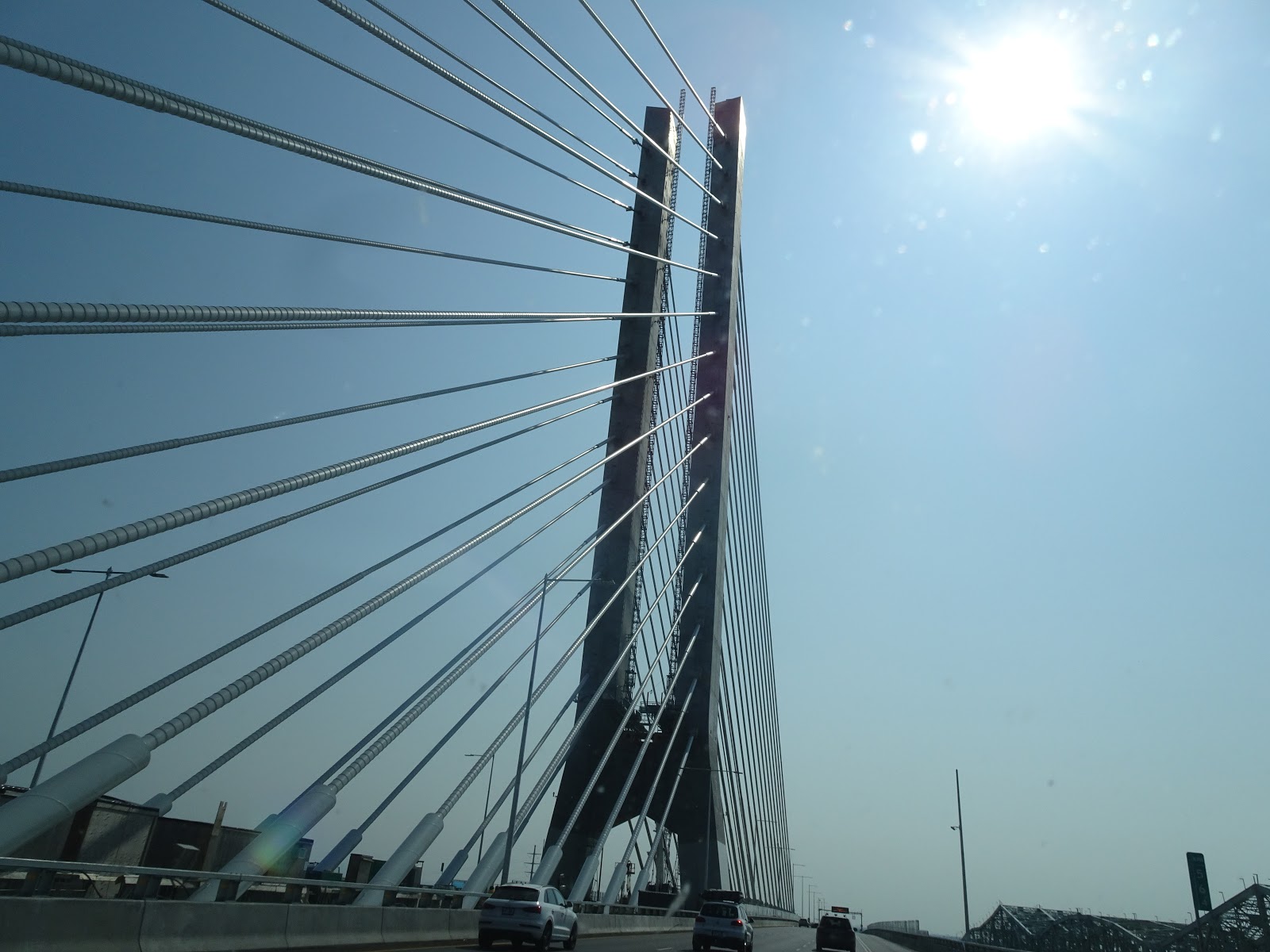 Despite a large crop of green glass apartment buildings at one end of the downtown, there were enough majestic old buildings to make us feel we were visiting a European capital. All the signs are in French, the official language of the province of Quebec, and everyone in Montreal speaks both French and English.
Montreal, Canada’s second-most populous city and host to the Summer Olympics in 1976, is clearly a growing city with a kinetic energy. A lot of the architecture was interesting and cutting-edge and construction was going on everywhere.
We used a few credit card miles Bob had accumulated to treat ourselves to two nights at the Marriott Chateau Champlain, a luxury hotel with breathtaking views of the downtown and Mont Royal from our arched 28th-floor window.

Alas, all the walking we did made our legs too tired to run, or even
walk, to the mountain, so we had to be satisfied with the view.

The weather was perfect, warm and summery each day with just enough clouds to keep it from feeling oppressive. (Bob kept reminding me that winter would be a far different story.)

The reason I started with the weather is because I want to talk about the food, and to us, the two were intertwined: we ate almost every meal outdoors while enjoying perfect weather. I had read that Montreal is a true foodies’ city, and we definitely found that to be true.
We found genuine Mexican food at Escondite in the Old City, where we sat at a corner table of the fenced in sidewalk dining room. I had tacos with crisp fried cauliflower, black bean paste and chipotle cream, so tasty! The guacamole was genuine Mexican, which meant no tomatoes or onions but lots of lime and cilantro. Que rico! The chips were fresh-made, light, crunchy and perfect. Bob enjoyed tacos al pastor, lots of meat the way he likes it with pieces of pineapple.
We wanted to enjoy jazz music at Mondavi, across the street, but the weather was just too glorious to go inside. (That was OK, though; we enjoyed wonderful buskers in the parks – a cellist, a singing guitar player, a violinist and even an opera singer.)
We had a mouthwatering French breakfast at Maggie Oakes on Place Jacques Cartier, where I had Le Santé (the healthy one; maple oatmeal, fresh berries and organic yogurt) with perfect café au lait and Bob chowed down on eggs benedict with fresh fruit and perfect fried potatoes. That experience was made even more delightful because we sat at a corner of the outdoor patio and watched the artisans and vendors in this popular pedestrian square set up for the day. The highlight was the bagpiper and a mini-squad of men in Revolutionary War-era costumes who marched down the street with rifles and a drum. 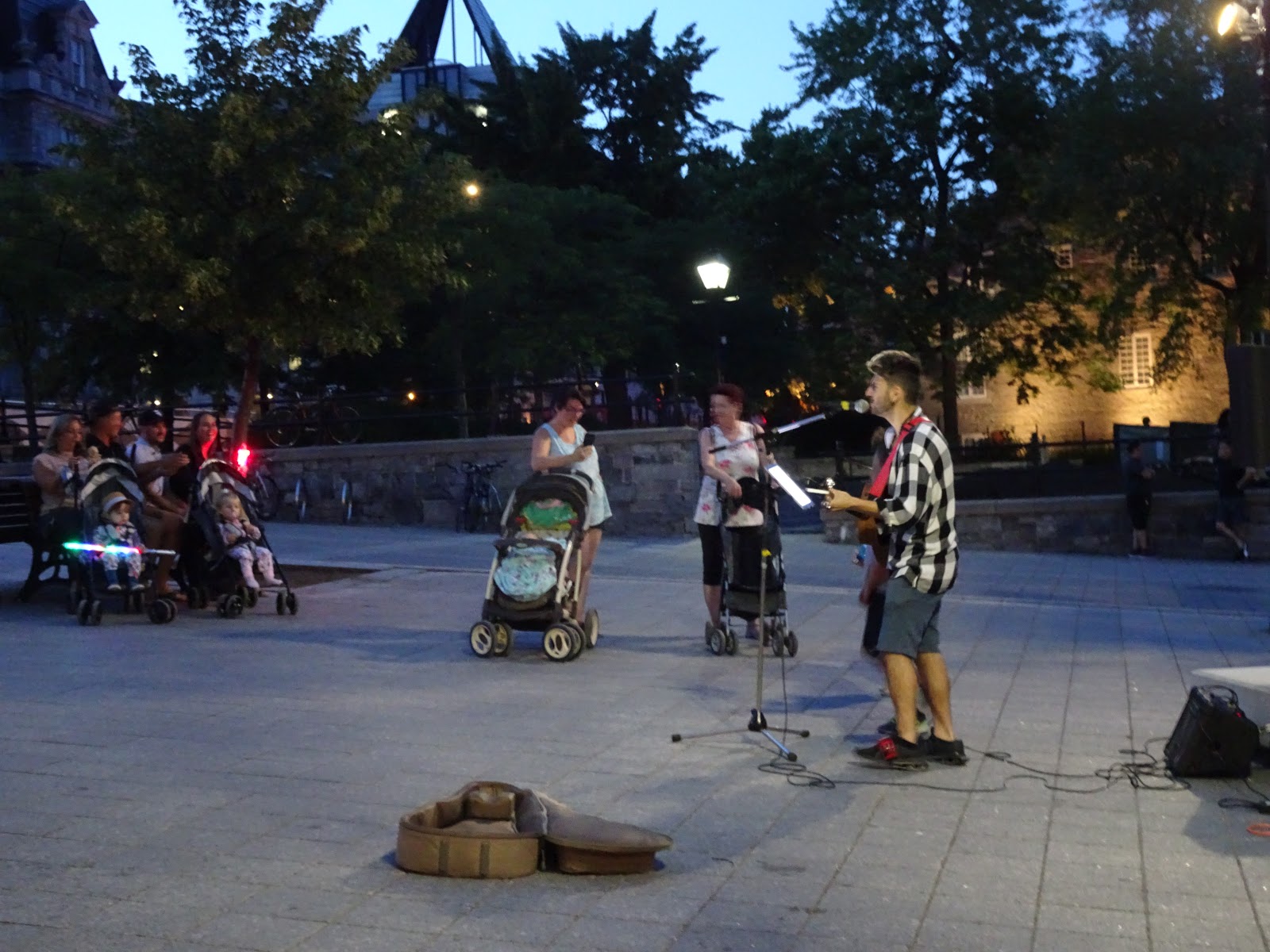 Our last dinner was a Paradiso in the Old City, where we enjoyed lasagna and pesto while watching the world go by.

In the morning we set out from our hotel in search of breakfast and found it to be mostly a shopping and business area. But a few blocks away, we stumbled into an underground mall and food court with a spectacular array of reasonable prices, delectable choices. Bob enjoyed a coffee-flavored muffin and I had one of the best chocolate croissants I have ever had the privilege to experience, as well as coffee from a coffee bar that offered about 20 flavor choices and an additional four cream choices. The bagel place across the way also beckoned tantalizingly, but a girl has to make
choices sometimes: I took the French option. Oh, la la!

We discovered a couple of choice rooftops for imbibing in alcoholic beverages while enjoying the view. At the Observatoire, we took the elevator to the 44th floor, sunk into a couch and indulged ourselves while looking at the downtown in all directions. (We declined to pay for entry to the actual viewing observatory, two floors up, and instead invested our money in a couple of well-made drinks.)
Afterward, we wandered toward Vieux Montreal and stumbled upon a tequila bar. Realizing it was actually July 24, International Tequila Day, we went in and ordered a couple of reposados. Mine was white when it should have been light gold from aging 18 months in oak barrels, but I drank it anyway. Salud!
We also enjoyed at a rooftop bar over the St. Lawrence River, where Bob and I enjoyed palomas while visiting with a friendly Canadian couple, Luc and Patsy.
Coming next: Part 2, The Old Port and Notre Dame